Hello everyone!  This past Monday,  December 7th, Angelic Pretty held their yearly main tea party in Tokyo.  It was their 15th anniversary, so they held a special showing of one off items that had been shown in Paris in previous years, as well as 16 new planned releases from their 2016 Spring Collection.

The following are the 16 planned names of the new prints shown at the tea party fashion show, as shown in the program from the party.  I do not know the cuts, colors, size info, or release times for any for these series, unless otherwise noted. Pictures were not allowed to be taken during the fashion show or of the displays (although that didn’t stop people, so photos are already floating around out there, but I will not be linking any of them here, but feel free to seek them out).  The whole party was heavily videoed by the media, so soon I expect a video of the fashion show to be uploaded by Angelic Pretty.  Photos linked here are all from the Tokyo AP Twitter feed, it might be worth checking it out!

Eternal Carnival (Sorry, I don’t remember at all what this was..)

Magic Princess (This may have been a pastel print with castles and “magical wands/sticks” that look like something out of shojo manga- but I cannot be sure).

Melty Sky (Dripping pastel shooting stars and moons, including a rerelease of the popular dripping crescent moon bag, this time in glitter colors.  I believe it is the print shown on the model on the right, and here by the same model on the left).

Wrapping Cherry (A cute summery print with, you guessed it, cherries!)

Baked Sweets Parade (the “donut” print that has photos floating around, I believe)

Strawberry Garland (A cute summery print with, you guessed it, strawberries!  I believe it is worn by the model on the right)

Jewel Marine (This has shells, a new take on Dream Marine! It might have been the two JSKs shown without blouses in the show, but not sure if it was Aquarium Carnival instead- the JSKs had one side with pearl straps or arm cuffs- cuts not so common to AP, and can be seen blurred here)

Aquarium Carnival (This print has sea animals on it…? there were dolphins at least…)

Arekukina-da (Harlequinade, a ballet) (I don’t remember about this print, sorry)

Charlotte’s Bear (Imai Kira collaboration, due out late February, with a large teddy bear border print.  It is unclear if this will be limited to tea party goers only at this point, but tea party goers get a special pre-reservation. In the past, AP has opened the reservations to the general public later, but not sure what they will do this time.)

Holy Theater (I am not sure which one this was.. there was a solid colored  with sequined crosses throughout, so this might be it, but I am not sure since it doesn’t fit the name so well).

Cecilia Cross (This print has the most photos circulating as there were samples at the show in the lobby.  It has the “jewel” logos from the tea party around the bottom of the print. Encased in the large jewels are a pegasus, a Saint Maria-like figure, a dove and cross, and so on. 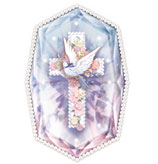 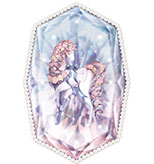 Holy Lacy Doll (this is a non print dress reminiscent of the style of the popular Katrina release, I  believe you can see it a little bit in a tweet from one of the models here in purple.)

Maria Rose Dress (I don’t remember about this print , sorry, it might have been a very lacy non print series if I am thinking right)

Antoinette Decoration (I believe one of these last two ‘Antoinette’ ones is being worn by the model in this photo, although you can purposely not see much of the print.  It had a antique cake like print… maybe?)

I am absolutely overwhelmed with messages right now, and having been away for several days to attend the party, I am really, really behind despite trying to answer emails while I was away.  There are lots of reservations and releases this week, and things are generally just very busy on top of all the excitement from the party.  Please have patience with me!  Invoicing and shipping will resume this week, and I will get to all your  messages as soon as I can.  Thank you!